“In uncertainty I am certain that underneath their topmost layers of frailty men want to be good and want to be loved. Indeed, most of their vices are attempted short cuts to love.” –John Steinbeck, East of Eden

Tonight Aaron and I discussed what might be our tragic flaws and agreed it would be more fun if we tried to guess each other’s. Although naming your spouse’s flaws might not initially sound like a fun game, you have to think of it like that classic interview question: what do you think is your greatest weakness. Of course, we all work too hard, we’re all a little too honest, we all can’t help but bring everyone coffee and muffins once a week, etc. So, you can see that by discussing our flaws, we are, in fact, talking about how awesome we are. Which is fun.

Aaron’s goes like this: The other night, Aaron shouted that the playlists on our computer had “disappeared” and I’m pretty sure he was about to turn the computer off and on again to get them back. He also lets sweaters, to-go cups, sheet music, receipts, car jacks, and packs of Goldfish pile up in the truck. This is because he is a man who still believes in creativity. He learns new songs on his guitar and teaches six-year-olds how to sing for a living. He has a keen understanding of the severe difference between what is enjoyable and what is banal, and there are times when he refuses to compromise and bring back into the house what he originally took out to the truck. Because is there anything more mundane than the act of unpacking, be it a suitcase or a truck?

But he made kettle corn this afternoon for our half hour trip out Funny River Road to meet his cousin Jeremy. We were about to leave, but still hungry, and instead of grabbing the box of stale crackers in the cupboard, Aaron scooped a handful of corn kernels, popped them in some sugar and salt on the stove, and we had a nice bowl full of warm, sweet popcorn for the drive out of town. Meanwhile, I was still thinking about how long it would take to wash the pan. The details do not tell Aaron what to do. He knows how to do one thing at a time and how not to rush.

My flaw—and it’s true—is I want everything to be meaningful. You know what it’s like when you feel the exact feeling that someone else feels at the exact same time? And then you either laugh or cry about it together? That’s my favorite thing to do.  The problem is, it looks like we’re going to get the internet back. It’s a long story (Chapter 1 “I’m Teaching Three Online Classes in the Fall”; Chapter 2 “I’m Taking Two More”; Chapter 3 “The Grocery Store Kicked Me Off Their Internet”; Chapter 4 “I Spend Almost as Much Money on Wireless and Coffee Drinks as I Did on the ACS Bill.”) If you’re not careful, the internet can make it hard to have a meaningful life. For instance, if we had the internet right now, I would have spent the last fifteen minutes checking email, reading something I already read on Baby Center, opening junk email to see if Groupon is still too funny for me, and trying to figure out who unfriended me on Facebook. Instead, I wrote about it. Admitting you have ridiculous tendencies is so preferable to acting on them.

Somewhere, someone has the perfect segue that would take me from tragic flaws to pictures of our big fish day at Jeremy’s father-in-law’s cabin. We’ll be back at the cabin on Friday to hang with Aaron’s other cousin Andy, so more pictures then. 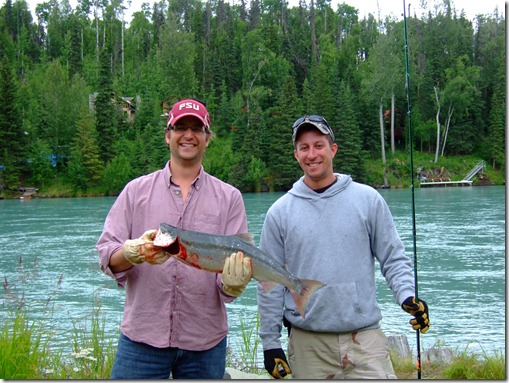 Aaron, Jeremy and the bloody fish. Jeremy told to be sure I got the rod in there, so maybe it’s a really nice one and should be noted, too. 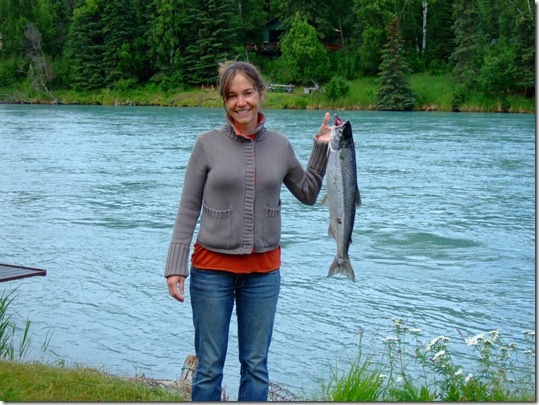 Heck, yeah, I caught that fish.

Aaron’s sweet little second cousin-niece Nina (what do we call the children of our cousins?).