Aaron finished up his lesson planning on Friday so we had a full weekend to ourselves. Here’s a pictorial glimpse of the last 48 hours, but first, a description of the weekend’s highlight from Aaron that I stole from an email he sent me and some friends:

In consideration of our family weekend,

“We were initially thinking of a Saturday drive to Homer for some sight-seeing, but apparently, it was raining everywhere but here so we nixed that idea.  Then we thought about going to a concert, but the $25 dollar per person ticket price plus child care sank that one.  Feeling defeated by our financial limitations to fun Sherry then boldly suggested we drive to Anchorage, buy a guitar amp I’ve been wanting, eat out, go shopping at their mall, and stay the night in a hotel.  While I admired her resolve in not being controlled by the constraints of ‘Caesar’, I had to talk her out of her cabin-fevered proposal.  We sat on our hands and blinked for awhile.  Then, like an unexpected flash of lightning without a storm in sight, it came to me.  ‘Let’s go to the thrift stores, visit Walmart (I hadn’t seen it yet up here), and sit at a coffee shop.’  Brilliant!
Depressing though it may sound, looking for bargains can be both thrilling and hilarious.  (Maybe not thrilling, but hilarious for sure.)  One anomaly about Alaska is its thrift store culture; it would not be bizarre or ironic to see your dentist or school superintendent or mayor browsing the clearance rack at Bishop’s Attic, Bargain Basement, or Second Hand Rick’s.  I suppose because Alaska has a long history of making do with what is available, people do not throw anything away up here and there is a pride attached to using something until it just can’t be used anymore.  Our thrift stores are the curators of this rich culture of bricolage.
At Bishop’s Attic you can find electronic items almost eligible for Antique Roadshow being sold for prices hedging on their possible future as relics.  Nineteen-inch screen tvs the size of an oven for 100 bucks, tape decks for $80, and ‘all in one’ karaoke machines for $120.  They have this one video game console, pre-Atari, that plays only the one game it is programmed for– I’m not gonna bash that because that just might have some museum value– whatever their price, I’m sure it will be fair compared to fleabay prices.  At Bargain Basement, right as I stepped in the door, I asked Sherry if we could leave, but she said the man at the counter has already noticed us, it would be rude.  Their store (literally, a basement), is so crammed with junk that you are squeezing yourself sideways through the store.  Signs warning to keep toddlers under close supervision like its a Swarovski crystal shop pepper the racks of home-dubbed video tapes, scratched up non-stick pans, and gently used nuts and bolts.  I almost bought a pair of wooden clogs that would’ve fit me, but they were $20, a little high for used wooden clogs, I’d say.  Finally, to the thrifter’s big kahuna, Walmart.  Here we found an entire section of reasonably priced trinkets branded AS SEEN ON TV.  I almost bought a ‘shake-weight’ for my brother for Christmas, but thought the action of using a shake-weight a little too lewd, even as a gag gift for my brother.  We did find cheaper toys at Walmart than our other thrifting options, so we bought Clara a box of wooden toys for Christmas.  They had this one section of toys where the only label on the toy was $1, $2, or $3.  I would’ve appreciated an actual thingy-label to understand some of those toys.”

This is me now, Blog Owner/Director/Producer. Prior to arriving to Walmart, we witnessed “Occupy Kenai” with lots of homegrown picket signs and large pieces of cardboard. 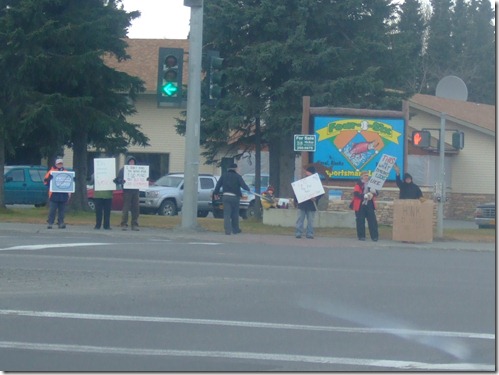 This was a long day for Clara. Eventually even the not-over-stuffed, in fact quite under-stuffed, beanbags at Walmart lost their appeal.  There was lots of crying in the car seat in between thrift destinations.  We got home, and I had no choice but to give Aaron the look. The look has super powers; it is called “Now.” As soon as I wield laser swords from my eyes, Aaron comes to my side and does amazing things to trick Clara into happiness.

That night called for a tower. The leaningest, most innovative tower of toys you can imagine.

Clara feasted her eyes and considered her next move. What else can we put on the tower, do you think, Dad?? 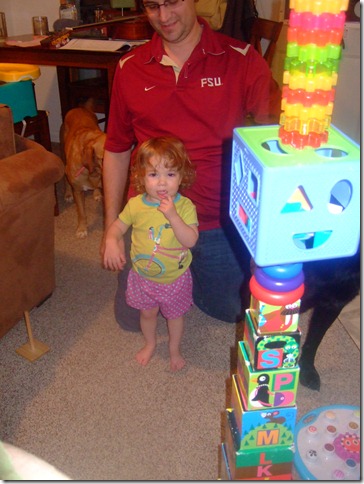 Uncertain that we would be able to heft Delilah up four feet, she settled on a stray toy hidden under the couch. 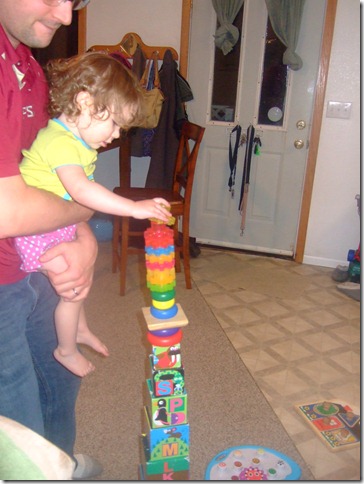 The tower would be completed only by Dee-Dee, the singing, joyous cheerleader bequeathed to us by Aunt Brooke and family. 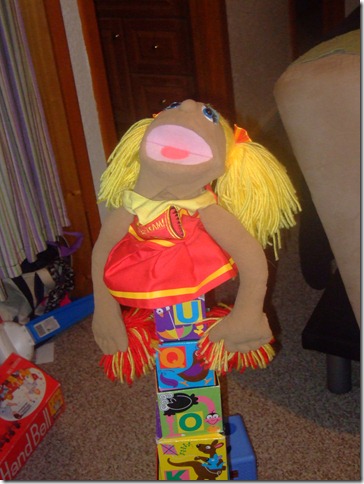 The next morning, Clara got to try out the fang-candy she weaseled out of Blockbuster for herself. I was trying to check out the fourth disc of True Blood (not lying, and not a very nice show, to be honest), and I look at what everyone else is looking at: Clara is trying to chew off the right incisor through the package. “Guess I better get this, too,” I chuckled loudly and left. Then, I kept those fangs in my pocket all day, waiting for the right moment to frighten Aaron with our waxtastic find. 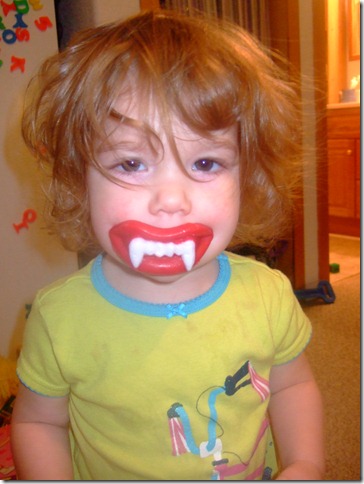 We had no idea that Halloween was to be celebrated by normal parents of toddlers over the weekend. We were training Clara to roar on cue on Saturday, but by the time we realized that Halloween would be over by the time it was Halloween, we were out of options. There were rumors of a trunk or treat near our house Monday night, but when we turned in, it was eerily dark and trunkless. 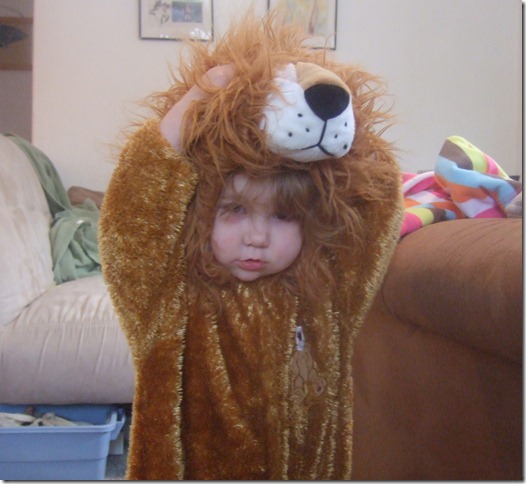 This is the look right before the next look that says “get me outta here before I cry for ten minutes straight.” 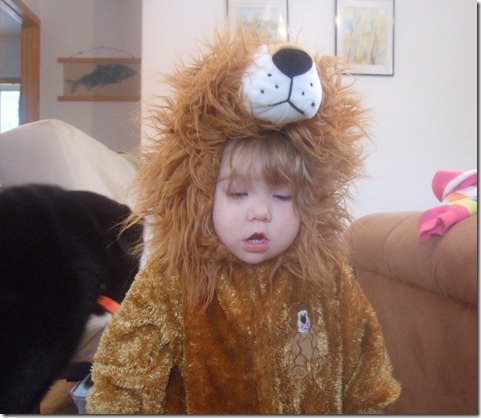 To finish off the weekend, we went for a walk to celebrate the skimpy, prissy snow that preceded today’s whopping fall of flakes. 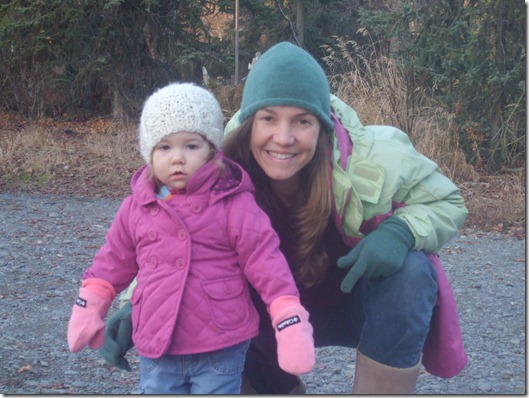 So, Aaron walked his girlie this way. 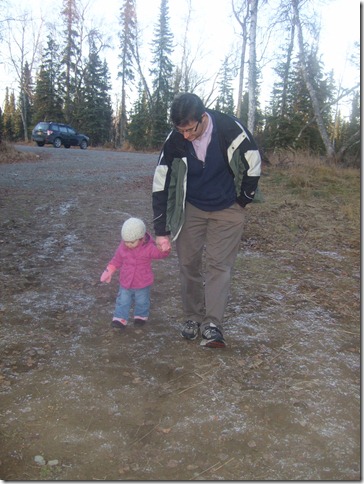 Then, they walked that way. I can almost see that little girl growing up on me in a life bathed in sunlight. 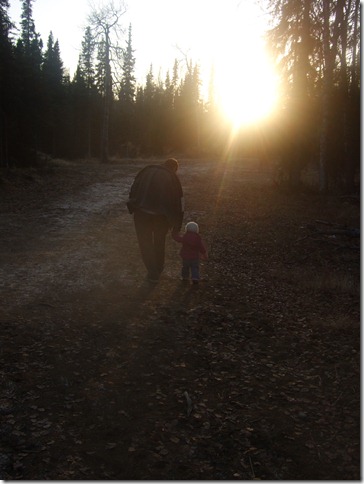 And, finally, where beanbags and used toys and costumes fail, the slope of a hill on a walk in the woods never does. 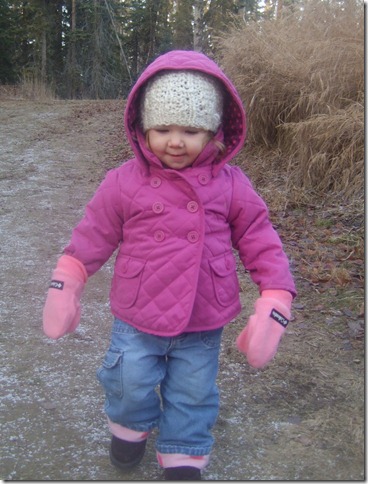 One response to “Frights”