Sometimes I’ll ask Clara if she wants an apple and she’ll say “no” and then grab it from my hand and eat it. I’ll say, “Let’s pick up toys.” She’ll say “no” and get started.  We haven’t gotten there yet, but I’m sure she’ll have a lovely little “why” phase wherein everything I state as matter-of-fact will be questioned and challenged.

I often think that toddlers are made from the same juice as adults but the juice hasn’t been diluted by experience. They’re like frozen concentrate before getting squeezed into an oversized pitcher and flooded by an onslaught of tap water.  They’re all our human impulses and inclinations bottled in a juice can. For instance, lately, Clara doesn’t see objects; she sees ownership. She walks around the cabin and says to my shoes “Mom!,” to the dog bowls “Lila!,” to the pile of pants on the floor “Dad!,” and to her tea cup set “Mine!.” Our favorite game is to fold laundry together as she guesses which article belongs to whom. She makes me wonder if, as adults, what we really see when we see something is who does, who could, and who should own it.

So, when Clara says “no” and does it anyway, I think, yes, that pretty much wraps up my feelings on personal and institutionalized forms of authority.

“No!.” Let me think about it for a moment, make the decision for myself, that sort of thing. Oh, okay, fine. I get it.

“Do undo others as you would have them do undo you.”

This is why Aaron has had to ask me six times if I’m sure it’s okay that he bought, at my request, the book called Marriage Confidential: The Post-Romantic Age of Workhorse Wives, Royal Children, Undersexed Spouses, and Rebel Couples for my birthday. Because nothing is quite so attractive as subversion when you went to private school your whole life.

The book, then, is about marriage in the 21st century. I’m in the chapter now subtitled “The Fifty-Mile Rule” which describes the “don’t ask, don’t tell” marriage that tolerates various incarnations of the “affair”—the emotional affair, the affair outside a fifty-mile radius from one’s living quarters, the casual affair, the affair with your neighbor’s wife, etc. This book isn’t going to change my life, but it is, at times, a refreshingly ecumenical look at a term whose meaning often gets lost in political or religious appropriations. I like this book because it gets Aaron and me talking about the beliefs that we usually take for granted or keep internalized. I like having the opportunity to not relate, to choose not to feel deconstructed, and to believe that not every articulate theory couched in words like “demimonde” and “ennui” is right just because it’s smart.

When a long day is trying to end in irritability, it’s handy to believe in something other than people. Sometimes you know that you’re not doing dishes for yourself or your daughter or your husband but for the thing you make among you—the family. And what is life but what we make with other people.

There’s a lot of talk in this marriage book about happiness, but you can’t say the word “happiness” around an English major and not make her think about Huxley’s Brave New World where all the placated people dosed up on their SOMA in order to be nothing more and nothing less than happy. Instead, I want to think about intimacy and challenge and the value of knowing the depths of another person.

When the “I love yous” get said before we fall asleep, I see my love as a slideshow: he’s in his plaid pajama pants putting a little spoonful of scrambled eggs in Clara’s bowl for breakfast; there’s the easy smile when he comes home and I say “before you get too comfortable, can you shovel up the dog poop?”; there’s one with him whinnying around the living room with a two-year-old cowgirl saddled on his back; there’s the way he’ll talk about anything anytime. Finally, there’s his inner Peter Pan—the guy who has the brilliant idea to turn our orange sled into a miniature dog mushing endeavor. 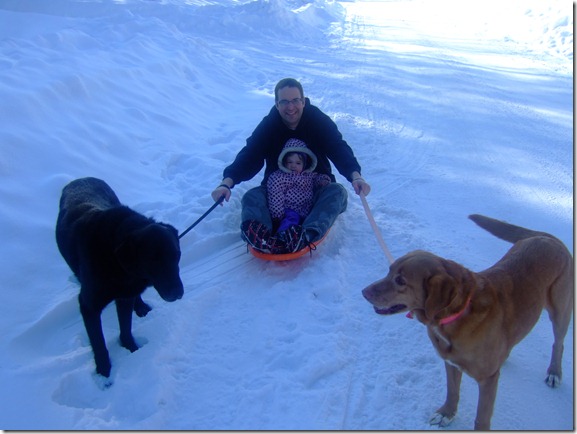 There’s the sweet and silly girl we made:

There’s a lot of ordinary and a lot of routine and a lot of “rock, paper, scissors” to see who’s got the next diaper. But, if life is like a book, I’d rather mine be a long novel than a collection of short stories. There’s usually better character development, more intricate plots, more realistic details, more complex themes, and a moral of the story that wasn’t issued as a verdict but is instead a culmination of choices and beliefs.

One response to “This Marriage Book I’m Reading”