The Zen of the Stay-At-Home Mom

At 1:04 p.m. today, Clara was peeing on the floor, William was screaming, Dakota was scratching at the door to come in from the rain, and I was trying to find out from Kathleen with State Farm what our estimated cost of car insurance would be upon switching our policies from an Alaskan branch to a Florida one.  Kathleen put me on hold to the tune of some horrendously loud elevator music, William spit up milk curds into my hair, and Clara started to mop up her pee with her skirt.

Fifteen minutes later, the children are sleeping in the backseat of the car with their sweet heads propped against their seats while I run a bunch of errands that include teller windows and drop boxes—errands that can be accomplished without unbuckling anyone. I’m listening to the Flobots on a mixed CD from my friend Megan. The air conditioner is circulating perfectly.  I feel like the luckiest woman alive.

What happened when I had Clara was that I lost control in the same way someone else might lose his or her mind—slowly and with resistance. I remember still trying, with Clara stuffed in a sling, to cook and clean elaborately. I remember trying to run vast amounts of errands in a single hour. I remember thinking, nothing needs to change.

But it did. It wouldn’t stop changing, and that’s how control gets lost. At times, you find control hiding in a closet or underneath the bed, and you get it back for an hour when the baby is napping.  Then she wakes up an hour earlier than expected and it’s lost again. When Clara was a couple weeks old, my friend Hilary brought us some food and said that, as a new mom herself, she was both encouraged and discouraged the most by the simple fact that as soon as you have a baby, every thing is always changing.

Staying at home with William and Clara, I have had to accept change in all its various visages. I got an email from an old friend at TCC with her signature at the bottom: Associate Professor of English, Tallahassee Community College. I am at peace with our choices, but I still nearly cried. That was me—a professor of English.  Now, I have no idea if and when I’ll get a shower or a decent night’s sleep.

Yet, I’ve found you can only learn how to accept your choices when you make them to begin with. Right now, our life is brimming with our choices. Everywhere I turn, I see a choice we made. Two of these choices, the two most important—the little brown-haired cuties I have crawling all over me, give me something I’ve never had before—a beginner’s mind.

There was a time when I knew without a doubt what every day would hold because I was in control. I knew when I would get up in the morning, how long it would take to get ready for work, what I was teaching that day, how long it would take to pick up groceries and dinner, and what time I would come home. Most days looked the same—nice, pleasant, easy-going, but the same.

Now, the seams of each day are loose. Nothing is sewn too tightly. We climb into each day like it’s a huge, over-stretched sweater that’s baggy and too big but still keeps you warm.

Living a life so intertwined with one’s children is like doing anything for the first time, but doing it for the first time over and over again. Like a third grader learning piano, I feel like I’m testing out life’s ivory keys to hear what they sound like. I see William’s smile for the first time, his very first smile, and we start something new and wonderful in that one moment. I hear Clara tell me as I slip out of her bedroom to change the laundry: “But, Mom, I was talking!,” and, as her growing awareness changes my own, something in me begins again.  I have no idea when they will nap or if we’ll make it out of the house by noon.  But, I’m discovering that you can either say “I have no idea” with the fear of the expert losing control or with the openness of the beginner who doesn’t need it after all.

On to the pictures.

I took Clara last weekend to the hippest flea market in north Florida. She got a rainbow necklace and Care Bear’s umbrella for the rain.

When we bought this house five years ago, we were bummed that a swing set took up a good chunk of the backyard. We considered breaking it down and letting some passerby pick up the pieces off our curb. Now, thanks to my workhorse of a husband, it’s been cleaned, stained, and properly mulched. We even killed off all those pesky West Nile mosquitoes with some (highly toxic, I’m sure) spray. Clara loves her new playground, and Aaron put some Turtle Wax on the slide to give her a real thrill. 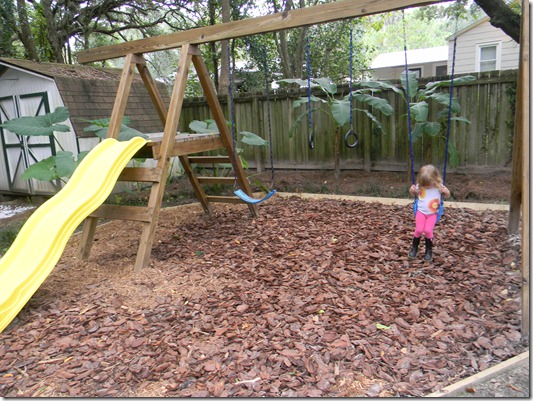 We’ve been working the Tallahassee Craigslist and picked up this cute little trike for Clara a couple weeks ago. She almost pedaled it up a hill two days ago, but for now its radio and horn buttons have the greatest appeal.

I won’t say he sleeps a lot but he’s as sweet as they come when he’s awake.

William is starting to watch Clara more and often can’t avoid it since she’d like to spend half the day hugging his face. 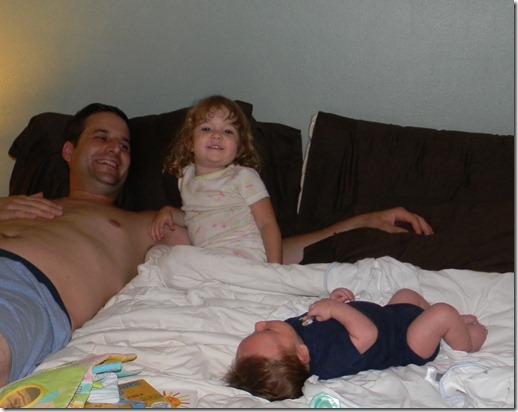 Here, Clara is teaching William how to count to four.

I’ll say one thing about these two sweet things: I don’t know if another older sister loved her younger brother as ferociously as Clara loves William. When I’m feeding or holding William, it’s not “My Mama!”; it’s “My Baby!” 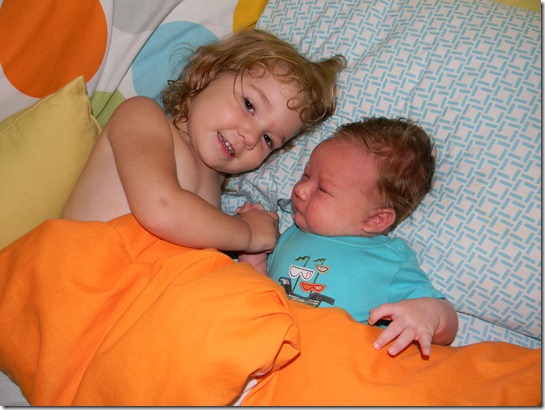 One response to “The Zen of the Stay-At-Home Mom”